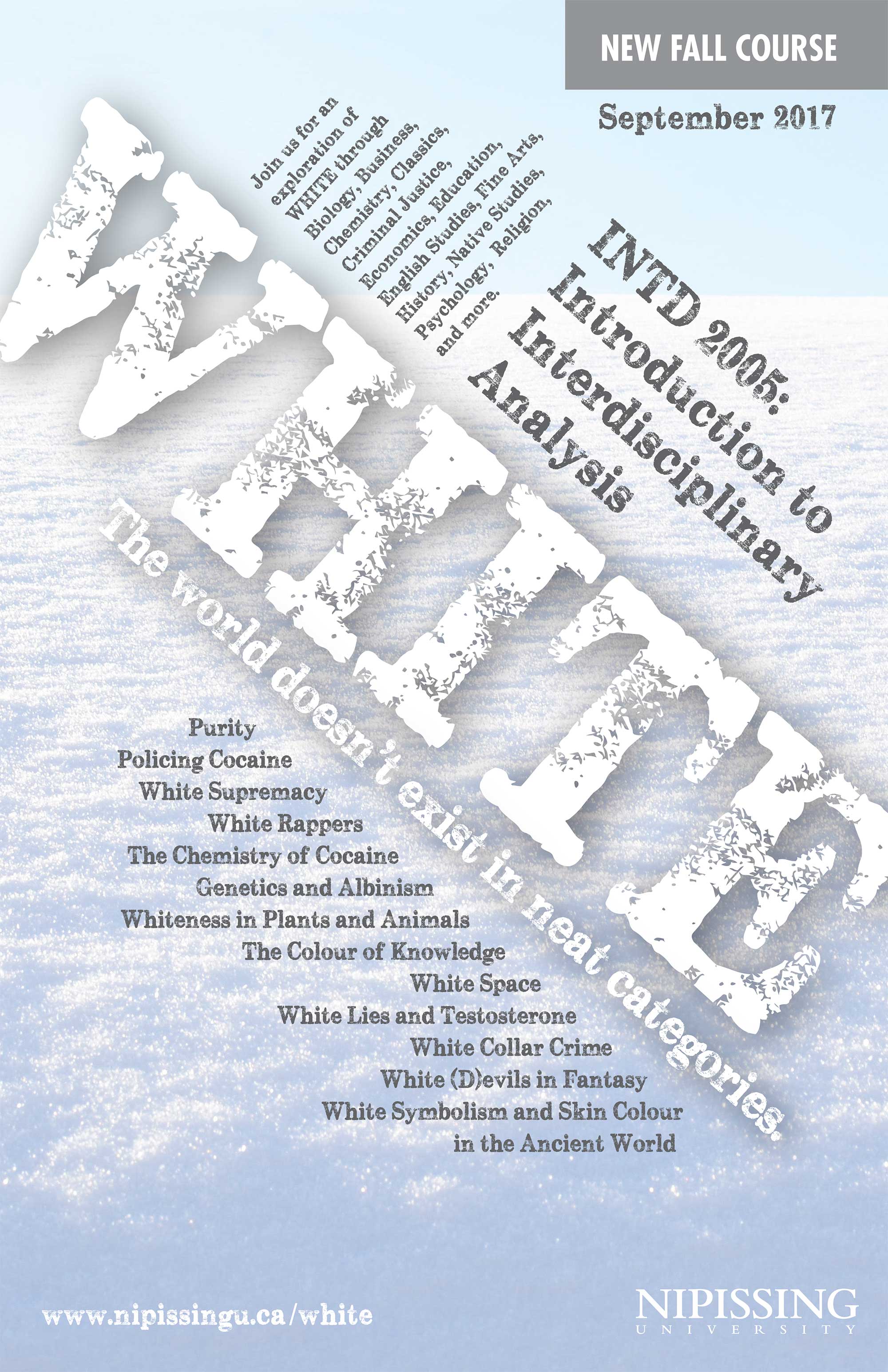 Because the World Doesn’t Exist in Neat Categories….

WHITE was number six for us for these amazing classes and like its predecessors, now that it’s done, we can tell you what it was about. In this aspect these are one of the most unusual classes you can take at University.  Before each of them begins, we can tell you who will be presenting and what their topics will be. But the real work of interdisciplinarity is richer and more complex than simply putting together a group of fascinating people from very different backgrounds. To really be interdisciplinary means being willing to wrestle with connections; it means exploring the ways in which seemingly vastly different topics might be connected.  WHITE really began when Drs. Peltier and Bedard asked us what it would take for us to be ready to learn. It’s a powerful question that lay at the heart of their teaching on WHITE and it functioned as a touchstone for the class over the whole year. What would it take to really learn the lessons of the glaciers, the lessons of climate change; what would it take to unlearn the lessons of racism?

and Implications for Reconciliation”

Overview: The Anishinaabe Medicine (Sacred) Wheel Teachings are multidimensional and are comprised of a layered understanding. This week begins with a review of various Medicine Wheel teachings to provide a context for our discussion of the significance of WHITE from an Anishinaabe perspective. These teachings embody: directions, elements, seasonal change, aspects of wellness, stages of life, and the gifts within races. We will explain the importance of Elders and their roles sitting in the North section of the Medicine Wheel. The class will apply this knowledge through reflections on reconciliation between Indigenous and non-Indigenous peoples.

Overview: In recent years, dramatic and frankly terrifying news of receding ice caps, rising sea waters and stranded polar bears have dominated news stories focused on climate change and for good reason. Across the world, scientists are virtually unanimously agreed that climate change is leaving its footprint every, but perhaps no where are its effects more glaring than at the poles. As indicators of climate change we will be exploring the status of polar snow, ice and permafrost.  Snapshots of past, present and possible future conditions of snow cover, mountain glaciers, sea ice extent and concentration, ice caps and ice shelves, and permafrost distribution will also be explored. Changes in the cryosphere are significantly affecting the Inuit, the polar ecosystem and global sea levels and we will also be considering some of these effects in this class.

“The Genetics of White: How Our Genes Reveal the Fallacy of Race “

Overview: Our discussion will begin with a brief consideration of the historically significant ‘white’ gene in Drosophila, using it to illustrate the concepts of mutation and genetic variability in populations.  We will then examine this in the context of human evolution, and evaluate the pseudoscientific notions of human heredity and racial purity which gave rise to the early 20th century eugenics movement, culminating in the systematic attempt to eliminate ostensibly “inferior breeds” under the Nazi regime.  We will discuss recent revelations concerning human genetic variation and the evolutionary basis of white skin colour, considering how our modern understanding of genetics precludes the biological categorization of human populations by ‘race’.  It is hoped that these discussions might shed light on the delusional nature of the current resurgence of white supremacist ideology in populist politics.

“White light and the magic of photosynthesis”

Overview: Our planet is bathed in energy from the Sun.  A small portion of that energy – known as white light – has the capacity to manipulate the bonds that hold together certain types of matter. Photosynthesis, which literally means ‘to put together with light’, has been actively manipulating matter for the last 2 – 3 billion years.  How do photosynthetic organisms perform this alchemy of transforming water and air into food?  What organisms can perform photosynthesis and in what way have they affected our planet? This talk aims to provide insight into the complexity and significance of photosynthesis, a chemical reaction driven by white light that is arguably the most important life-sustaining process on Earth.

Overview: Colour imagery is one of the main ways in which evil is constructed, represented, and symbolized in literature. Although representations of the conflict between good and evil in western fantasy often align good with the colour white and evil with the colour black,   evil is also frequently represented as white and whiteness.  This lecture examines some such re presentations of white evil in fantasy in order to examine what fantasy has to say about theology and history in its construction of white (d)evils.

Overview: Where would a book be without the whiteness of its pages, or art without the whiteness of the gallery walls? When we think about the meaning of writing or the meaning of art we collectively assume it resides in the writing itself or in the object that gets described    as art, but could we have either of these things without the stage on which they are set?  And yet we are not supposed to notice that stage, and interestingly, mostly we don’t. All  that whiteness seems to disappear – we dismiss it as blank and meaninglessness but is it really? This class is an exploration of the meaning of all that invisible, supposedly insignificant whiteness found in galleries and on the pages of great creative works.  We will learn about the background and politics of the gallery as “white cube”; the role and    function white plays in the production of art and in the art of writing; and the not so blank and not so neutral use of white in contemporary art practice. And there’s bound to be more as together we make all that creative disappearing whiteness both visible and meaningful.

Overview: In early 1974, tiny Wisconsin based Tactical Studies Rules published Dungeons & Dragons (D&D).  Consisting of three short rulebooks and a white box, D&D not only introduced an entirely new concept in gaming – the roleplaying game- but provided a central cultural building block of the information age.  From computer gaming to Game  of Thrones, D&D “made these later multibillion-dollar pop culture phenomena possible.” What are the origins of D&D?  Who designed it?  Who played it? Why?  What were the   game’s core concepts, practices and rituals? And in what ways did Dungeons and  Dragons help to shape our contemporary culture?  ‘White Box’ D&D is the most culturally influential artefact that’ve never heard of.  Until now.

Overview: This lecture examines white rappers by engaging the ongoing debates over appropriation and authenticity. Of course, by engaging those debates we must first understand the long  shadow that slavery has cast over American history and its implications in the modern world. Hip hop is a fundamentally black genre, and defining the line between admiration and appropriation for white artists is a discussion necessarily entangled in racial politics. Complicating all of this is the overriding concern in American music with authenticity (yeah, I used to like that band before they sold out/jumped the shark). Who gets to speak for the black experience: Ice Cube or MC Hammer? Do white voices have any place in the conversation?

“The Chemistry and Biochemistry of Cocaine”

Overview: Cocaine is an alkaloid and a member of a broad group of plant substances that also includes nicotine, caffeine, and morphine. It is a powerful addictive stimulant drug extracted from the leaves of the coca plant native to South America. Although health care providers can use it for valid medical purposes, such as local anesthesia for some surgeries, cocaine is an illegal drug. Today, cocaine is classified as a Schedule II drug,  which means that it has high potential for abuse. As a street drug, cocaine appears as a fine, white, crystalline powder and is also known as Coke, C, Snow, Powder, orBlow.  Research has shown that cocaine can alter brain structure and function if used repeatedly. This presentation will cover a brief overview of the chemistry, biochemistry, pharmacology, and metabolism of cocaine.

“The yin and yang of face perception: How WHITE people process