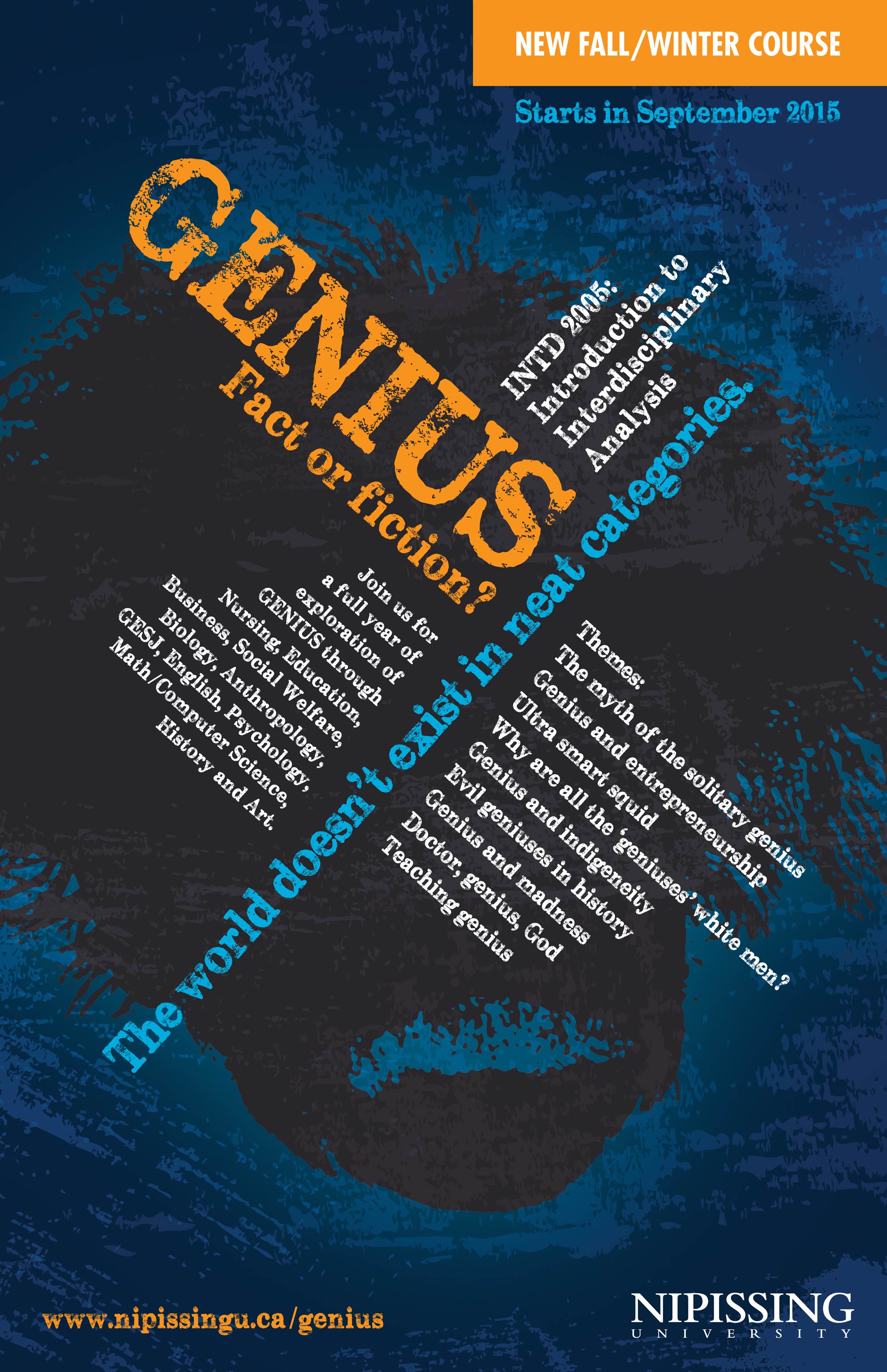 GENIUS was our 5th offering of the interdisciplinary concept course and the second one to be offered in the full format of the Fall/Winter term. Perhaps unsurprisingly, given the topic, one key thread running throughout the course was about the relationship between knowledge and power. Why are those identified as genius so often men, almost exclusively white and typically Western educated? Where does genius really lie, in the mind of the creator or in the creation itself? Is it the iPhone that is genius or Steve Jobs?

By the end of the first class it was all too clear that genius is a complicated notion, one the meaning of which has changed considerably over the course of history. Yet, beneath many of its manifestations can be seen an abiding notion of value, a notion of how certain knowledges, created in certain contexts, by certain kinds of people get threaded in and through systems of power that, among other things, both racialize and gender knowledges. How else could a Picasso painted in a single day sell for $106.5 million dollars yet the work of so many indigenous artists be reduced to an almost valueless category like folk art, or worse, craft? If knowledge is power, genius is the concentration of that power in the hands of only a few.  In the end, after all our deliberations across so many different disciplines, the most stubborn question was this: Does genius even exist?

Overview: Setting the stage for a year-long exploration of the concept of genius, this class will focus on the relationship between the idea of genius and power. Are people born a genius? Do they earn this title? Can anyone be a genius? If not, why not? When did the notion of genius emerge and what kinds of knowledges or practices qualify as genius? These are just some of the questions we will begin to consider in this first class as we set the scene for an extended reflection on the notion of genius across more than a dozen disciplinary contexts.

“Capitalism, Inequality, and the Individual Genius”

Overview: This week focuses on the individual (supposed) genius and his (it’s always “his,” isn’t it?) role, both real and imagined, in the production of wealth and the creation of jobs. We ask questions such as: Are some people so talented they deserve to be billionaires? Do all individuals “get what they deserve”? Does a culture that rewards greed benefit mostly everyone or just a few? Does allowing unlimited personal accumulation harm society in any way (think of health, crime, and democracy for starters)? Do high levels of inequality help capitalism or hinder it?

“Truth, Power & Prophecy: Beyond Material Knowledge Among the Sahtu Dene”

Overview: Ethnographers working in Dene territories have identified strong connections between conceptions of knowledge, power, and personal experience gained through spending time on the land. This talk will explore various forms of knowledge as identified by the Sahtu Dene, and how these shape conceptions of authority and truth.  Particular attention will be paid to the ways in which Dene forms of knowledge contrast with Eurocentric processes of environmental management and the assessment of the impacts of resource extraction in the Canadian north.

“The Banality of Evil Genius: Colonization, Cultural Genocide and the Development of the Indian Department in Canada”

Overview: In 1755, at the height of the Seven Years’ War between Britain and France over the “ownership” of North America, British officials established the Indian Department, ostensibly to co-ordinate the fur trade and to maintain its alliance with the Iroquois Confederacy.  By the 19th century, however, the Indian Department took on a far more sinister role – fueled by a belief in the superiority of British ideals and society, initiatives were created to bring British “civilization” to indigenous people throughout the colonies of British North America, and the Indian Department became the vehicle for this expression.  Based upon the foundation that it was Britain’s duty to bring Christianity and agriculture to First Nations peoples, Indian agents shifted their focus towards encouraging First Nations people to abandon their traditional ways of life and to become assimilated into the larger British and Christian settler society.  Establishing a large statist bureaucracy to accomplish this goal, the new federal Department of Indian Affairs created by Confederation utilized appointed Indian agents to promote “civilization” among First Nations peoples.  Employing such methods as treaty land transfers, the infamous Indian Act of 1876, residential schooling and the outlawing of aboriginal cultural practices, the Department of Indian Affairs followed the mandate of its Deputy Commissioner Duncan Campbell Scott who famously declared in 1920, “Our objective is to continue until there is not a single Indian in Canada that has not been absorbed into the body politic and there is no Indian question, and no Indian Department.” Despite a name change in 1936 to the Department of Indian Affairs and Northern Development, assimilation and Canadian cultural dominance continued to be the agenda for First Nations peoples, as witnessed by the continuance of residential schooling, the Indian Placement Program and the publication of the aptly-named White Paper in 1970.  The legacy of the Indian Department in Canada is one of a large, faceless bureaucracy supporting institutionalized and systemic racism; in a very real sense, the Department and its agents were a major perpetrator of cultural genocide among First Nations peoples.

Overview: How do corporations “handle” genius employees?  The answer is most likely “not very well” as they don’t fit into most corporate cultures and often cause more trouble than other employees.  This often gives rise to the entrepreneur because they don’t fit into existing corporate structures very well.  A few companies, like 3M have created outlets for geniuses, but most either won’t hire them or end up firing them.  Some additional questions to consider: if a corporation is considered a person under the law (and it actually is), then how do we make sense of corporations as “geniuses”?  Can we and how would we measure their genius?  How can we separate a genius corporation from those that work there or do we?  Can a genius be a collective (i.e. an organization) as well as an individual?

“Genius is as Common as dirt”

Overview:  The title for this talk is taken from a quote by John Taylor Gatto (see below for the full quote). This session will be interactive and we will have an opportunity to talk with each other around the topic of GENIUS and beyond. The hope is that we will come away with a better understanding of ourselves and how schooling, learning, teaching, and. . . . continues to impact our inner genius.

“I’ve concluded that genius is as common as dirt. We suppress genius because we haven’t yet figured out how to manage a population of educated men and women. The solution, I think, is simple and glorious. Let them manage themselves.” ― John Taylor Gatto, Weapons of Mass Instruction: A Schoolteacher’s Journey through the Dark World of Compulsory Schooling

“The Romantic Visionary and the Scientific Sociopath: Two Views of the Genius”

Overview: The Romantic poet scribbling away in his garret, overflowing with passion, angst and insight into the human soul makes a familiar portrait of artistic genius from the late-eighteenth century onwards.  In this lecture, we take a look at this dominating ideal of genius in the public imagination, but with an eye to understanding our own time.  Why has this notion of the artist genius given way now to the figure of the hyper-rational science-oriented genius: House, Sherlock, The Rosie Project, Big Bang Theory, and An Abundance of Katherines (by John Green of Fault in our Stars fame) all repeat this idea of the genius as almost an organic computer, so lacking in human passion and emotion as to be on the verge of socio-pathology.  Why has our idea of genius shift radically from humanist to scientific?  This lecture explores the shift by looking at select texts from Grey’s “Elegy in a Country Churchyard,” to Arthur Conan Doyle’s Sherlock Holmes, to the new BBC Sherlock.

“The Evolution of Intelligence”

Overview:  “The absence of a neocortex does not appear to preclude an organism from experiencing affective states. Convergent evidence indicates that non-human animals have the neuroanatomical, neurochemical, and neurophysiological substrates of conscious states along with the capacity to exhibit intentional behaviors. Consequently, the weight of evidence indicates that humans are not unique in possessing the neurological substrates that generate consciousness. Nonhuman animals, including all mammals and birds, and many other creatures, including octopuses, also possess these neurological substrates. (Cambridge Declaration of Consciousness, July 2012)

Consciousness research is rapidly evolving and previously held ideas about the uniqueness of human consciousness, i.e., about so called human genius, are falling away. Both birds and octopi can recognize and remember individual humans, and many primates as well as elephants pass the self-recognition test. These are two of the most significant tests used by scientists and philosophers to justify human exceptionalism, namely, the ability to recognize self and the ability to recognize particular others.  But as science discovers more about non-human animal intelligence and the definition of intelligence keeps expanding where to do we draw the lines between the conscious and non-conscious? Can we reasonably support a claim now that plants are without consciousness, or intelligence, when we know they have vastly complex and impressive chemical communication strategies? Can we really say don’t have language – historically another of the hallmarks of human exceptionalism?

The goals of this class are to define consciousness in a way that can be applied to all life forms, and position “genius” within this definition. We will explore the question of whether we can safely treat plants as “unconscious” and briefly consider the nature of the consciousness traits that are evident in birds, whales and cephalopods (Octopi, squid and cuttlefish). We will also consider one hypothesis to explain why intelligence might actually be more common in birds than mammals and we will conclude with a consideration of what this all may mean for humility as not just a cardinal virtue but also a reason-based value that should inform our relations with the non-human living world.

Overview: Open any art history textbook or visit any major museum and you are bound to come across artists whose names you will recognize; Leonardo, Rembrandt, Monet, Picasso – “masters” – revered and recognized for their work and genius.   But who are their contemporary counterparts?  And does floating a tiger shark in formaldehyde, sitting silent for 736 hours, painting images with chocolate syrup, or dropping an ancient Chinese vase constitute acts of genius? Given that we find ourselves in a rather complex moment in time where the definitions of art are expanding rapidly, moving beyond disciplinary boundaries and at times categorization – how do we begin to understand what art is, let alone what might constitutes “great art”?  This lecture will introduce and examine the practices of a number of artists working today in the hopes of coming closer to understanding current notions of genius in the art world.