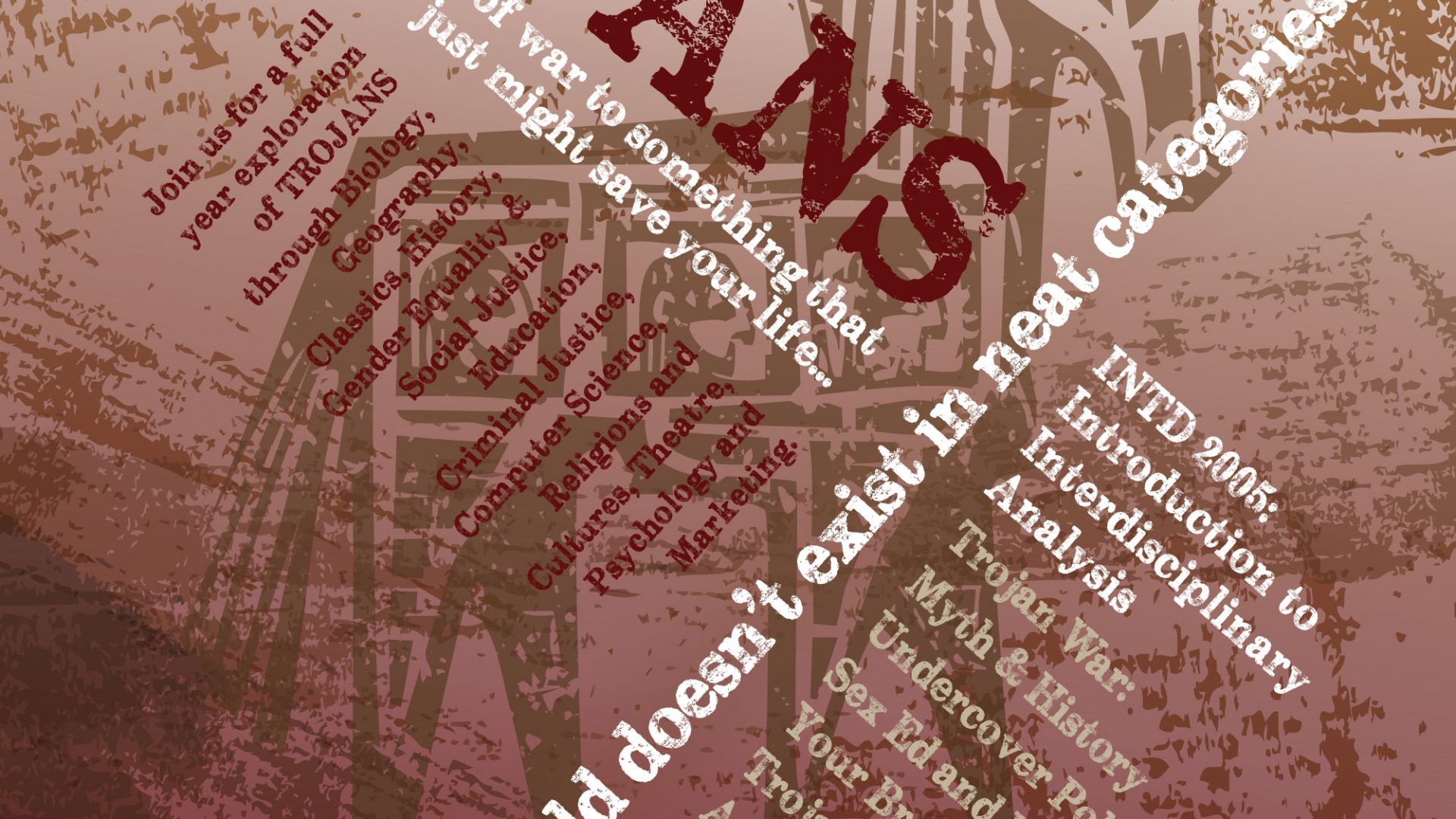 Because the World Doesn’t Exist in Neat Categories….

TROJANS (2018-19) was the seventh time we have offered these amazing classes and like its predecessors, now that it’s done, we can tell you what it was about. In this aspect these are one of the most unusual classes you can take at University.  Before each of them begins, we can tell you who will be presenting and what their topics will be. But the real work of interdisciplinarity is richer and more complex than simply putting together a group of fascinating people from very different backgrounds. To really be interdisciplinary means being willing to wrestle with connections; it means exploring the ways in which seemingly vastly different topics might be connected.  TROJANS  began where you might expect, with the Trojan war way back in antiquity and right from the start the question of what counts as truth was there. Did it actually happen? Was there really a Trojan horse? Is it myth, legend, history – maybe all three combined? Perhaps it was a brilliant instance of fake news? Does it matter? These are the kinds of questions we were chasing throughout the year.

Overview: Discussion will focus upon two main things; firstly, the historical city of Troy and the Trojan people in the context of the late Bronze Age. We will examine the relationship between the Trojans and Greeks in so far as this can be reconstructed given the slight and highly fragmentary Bronze Age evidence and will also try to separate myth from history regarding the Trojan War. Secondly, we will examine the place of Troy and the broader Trojan saga in the imagination of ancient Greek and other ancient societies, especially in the context of ethnic identity formation.

Overview: The sexual purity movement in evangelical Christianity makes claims to cultural relevance and scientific and therapeutic validity while also claiming to be counter-cultural and radical. How do these claims work? What techniques and symbols make them persuasive and effective? This lecture examines the use of media, of symbolic dichotomy, and of ritual performance in promoting and encouraging a distinctive sexual politics.

Undercover Policing’ and the Postmodern State

Overview: We here review the construction of (Internet) child luring as a social problem. The reporting of news organizations, claims of members of parliament, and the court’s treatment of persons convicted of luring a child are used to contextualized the phenomenon’s history and explore claims of an ‘undercover policing’ initiative.

Overview: Trojans are the best selling condom in the United States. Almost 75% of all condoms purchased are Trojans. But the ubiquity of condoms in American drug stores, not to mention college dorm rooms, belies the very complicated and contentious history of contraception in America. For example, until the late 1950s condoms had to be sold as a method of disease prevention, not birth control, to avoid running afoul of the Comstock Laws. In fact, one of the first things Europeans did when they reached the shores of North America in the 1600s was pass laws about sex and contraception. Indeed, ever since there has been a government, it has wanted to get all up in your business. We will explore and try to understand that history in this class.

Overview: The human body is a fortress with numerous defenses that keep the outside world out, but despite years of evolutionary progress and adaptation, we are not as impermeable as we would like to think. Viruses are one of the few entities that can actively infiltrate the safeguards we have in place to keep our bodies healthy.  There is no better way to study this than at the level of the cell: the basic unit of life.

Overview: Big ideas reside in the foundations of how “development” is understood. Depending on the context it is used as a metaphor for wealth, freedom, and well-being. But what if the very structures and processes that have been designed to realize these lofty goals result in poverty, deeper colonization, and marginalization. We will look specifically at the role of “aid” in development spaces, and the use of public sphere in development discourses.

Mindfulness for Money: Slipping spirituality in the corporate back door?

Overview: This class will explore the phenomenon of mindfulness workshops, trainings and practices for employees, which are currently proliferating in the corporate world. Building on our Trojan theme, we will consider how spiritual and religious practices from various traditions are being packaged for corporate cultures and rebranded as tools for building economic success. Is a meditating Google employee being religious? spiritual? Does it matter? Our discussion will compare ancient religious texts and teachings on mindfulness with the current array of corporate mindfulness trainings in order to understand what the growing trend of meditation in the workplace is all about.

Overview: Students will critically examine sexual health education in Ontario classrooms. Is it necessary? Do we really need sex ed in schools? What do parents think? What about other stakeholders? In light of ongoing controversy in Ontario, students will be challenged to consider all sides of the curriculum debate as they reflect on the issues through their own sex ed classroom experiences.

Overview: Success in business requires sound competitive strategies.  Organizations must determine their own ethical boundaries in terms of their competitive aggressiveness. Ambush marketing is a tactic that is increasingly relied upon to deliver needed business results but is also the subject of great moral and legal debate.  A company engages in ambush marketing when they attempt to reap the benefits of sponsorship by falsely implying an association with a property without paying any required sponsorship fees.  Critics of ambushers view them as dangerous predators that purposely deceive consumers by disguising themselves as genuine sponsors and attacking the goodwill and interests of true supporting partners.  Proponents of this approach however defend it as legitimate, creative and fair survival practice. In preparation for this session, students are asked to complete the two assigned readings and to email the presenter with their position on the topic of ambush marketing.  This brief submission should include the following sentence:

Overview: In this class, we examine the history and development of international human rights.  We ask how human rights are enforced and by whom?  Given the entrenchment of human rights in international law and governance, why do so many violations persist?  What are the major successes? To what extent are human rights a Trojan defender of human dignity, and to what extent are they a Trojan horse for western cultural imperialism?  We address this last set of questions through a case study of female genital cutting.

Overview: Euripides’ tragedy, The Trojan Women, first produced in or around 415 BCE and frequently referred to as “the greatest anti-war play ever written” (McDonald 2003, 116), presents the Greek victory in the Trojan War as a bleak and brutal affair. It is especially bleak for the leading Trojan women, who are enslaved and led off to serve the men who killed their husbands and sons and destroyed their city. This presentation will examine the context of the play at the time of its writing, focusing on the way the play asks its audience to see beyond appearances and recognize that “we” are no different to “them,” and that the savagery of the gods is also human savagery. We then briefly survey the reception history of the play, and examine in more detail a number of striking contemporary adaptations.