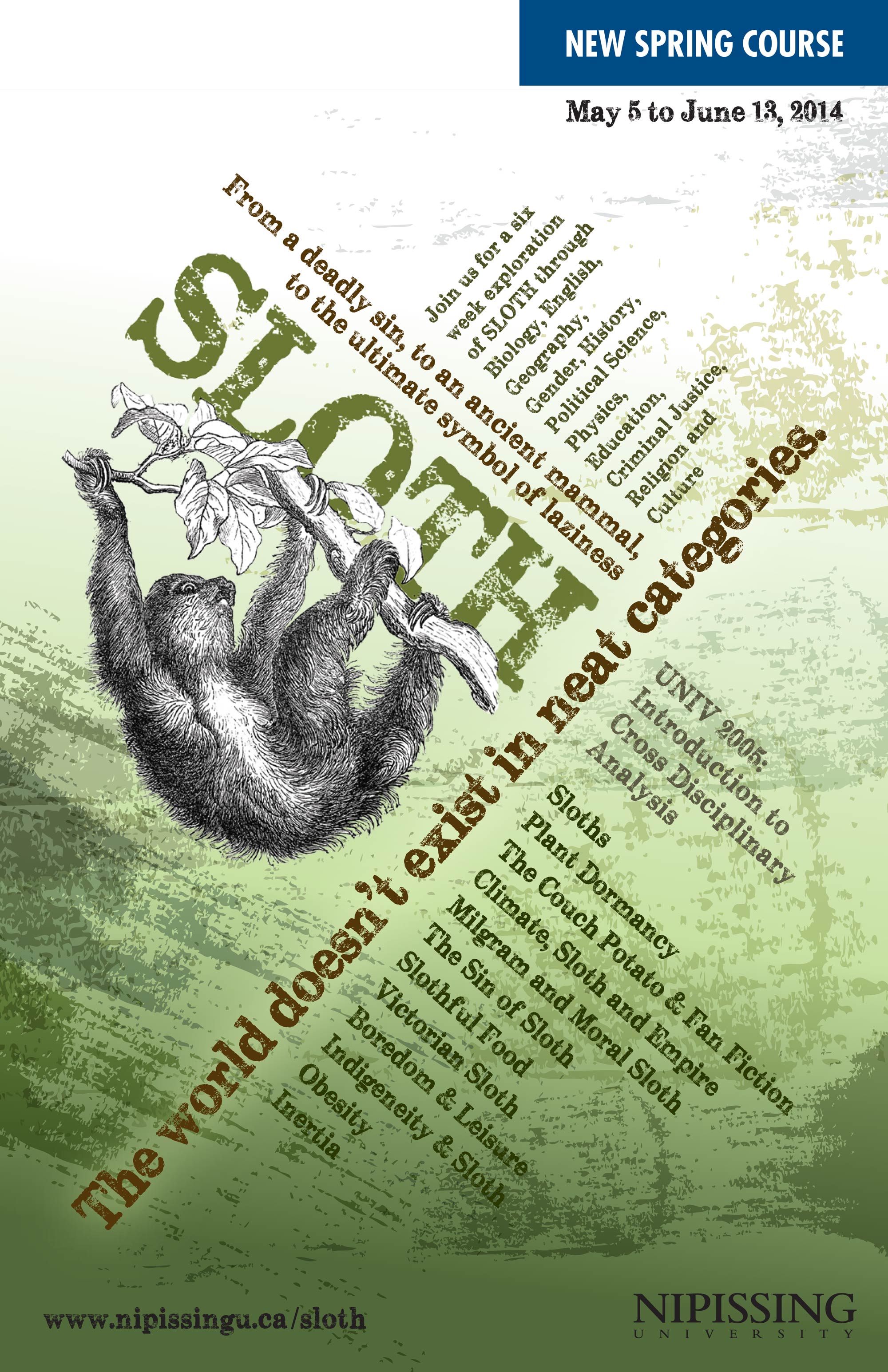 SLOTH was our 2nd offering of this new model for delivering interdisciplinary programming and as with DIRT, it is only after the fact that we can say with any degree of confidence precisely what the thread was that ran through such a diverse range of topics. Like DIRT, it ran in the condensed Spring term with classes offered four days per week for six weeks.

Where we came to discover that DIRT was ‘about’ taxonomies, about the ways in which we organize and make meaning, SLOTH was an exploration of difference, of the many ways in which we produce ‘others’.  Consider no more than the implications of the word and the ways in which its use changes how we feel about things, from people to animals. The accusation of sloth against native peoples in the Americas and elsewhere reflects the moral language of European colonization, imposed on ‘others’ in order to shame and discipline. The so called laziness and lassitude of the creature itself is the very model of all that was contemptible to European, post-industrial sensibilities. Yet as we know now from biology, sloths themselves are creatures whose capacities for energy conservation are in fact extraordinarily sophisticated, admirable even. And plants whose sloth-like attachment to dormancy show us that stasis and movement are in fact inextricably entwined in the story of life.

“Habitats and Hosts: From Pre-History to the Contemporary Rainforest”

Overview: Sloths are (slanderously) named for a deadly sin…in today’s class we will review the biological evidence and explain why sloths deserve our respect, admiration and protection.

“Plant Dormancy – When stasis is the essence of life”

Overview: Divided into two parts, this talk will consider two types of plant dormancy: seasonal dormancy and dormancy in seeds. In part 1, seasonal cycles of growth and dormancy will be presented by showing how plants grow and what causes that growth to stop. Impacts of climate change will be considered and a case study showing how dormancy can be manipulated during greenhouse production of tree seedlings used in forest regeneration will be described. In part 2, plants producing seed will be presented in an evolutionary context and mechanisms of seed dormancy will be explained. Our relationship with seeds, agriculture’s green revolution, and the advent of genetic engineering will be presented, raising questions about how best to sustainably grow crops and feed over 7 billion people.

Overview: “Sloth…is an oppressive sorrow, which, to wit, so weighs upon man’s mind, that he wants to do nothing.” ~St. Thomas Aquinas

This class will trace the religious history of sloth, and how it came to be included as one of the seven deadly sins. Originally, the seven sins were characterized as eight afflictions, described in the writings of Evagrius Ponticus (345-399 CE). These afflictions were psychological descriptions of the shared experiences afflicting body, mind and soul, gathered and written down by the solitary desert monastics. Eventually, this list of eight afflictions was adapted and transformed into the idea of the seven deadly sins. I will then explore Dante’s encounter with the slothful in the Inferno and consider how his representation of the slothful relates to the ancient affliction of acedia.

“Improving the Nation: Moral social reform in the great age of industry”

Overview: In a society that celebrated the virtues of hard work, thrift and self-help, sloth was a particularly offensive quality. This lecture considers the moral and physical understanding of sloth in nineteenth-century England and the ways that ideas about sloth, or laziness, impacted perceptions of class, gender and race.  As a case study, we will consider British responses to the Great Famine and Ireland’s dependency on the potato, otherwise known as the “lazy root.”

Overview: Physics is the study of the material world by looking at patterns that can be translated into rules, laws, models and theories. “Inertia” is a lecture in which we will try to familiarize the students with the laws that govern motion. The lecture is structured into three parts. In the first part we will describe motion and its physical quantities. The second part we will introduce the concept of inertia and the laws that explain motion (Newton’s Laws). In the third part of the lecture we discuss if the laws of nature are viewed the same by observers that are in different Reference Systems. The lecture is mostly a conceptual view, but we will also make use of some equations since the language of math is so eloquent in describing general statements in physical sciences.

“The malaise of modernity: boredom, technology and leisure”

Overview:  This lecture will explore the “malaises of modernity” through a discussion of the technology and the “culture industry.” While some thinkers suggest that the modern project is completed at the “end of history” followed by millennia of boredom, it is argued that the revival of the ancient practice of leisure might resuscitate a richer experience of being human.

“The Couch Potato and Fan Fiction”

Overview: One powerful contemporary image of sloth is the couch potato watching television in a glassy-eyed state of passive consumerism.  But many viewers of television and film are not passive, but rather creative and transformative in their viewing.  This lecture examines the labour of fandom in relation to the Harry Potter movies, including fan fiction, fan vids, and fan activism.  It examines whether fandom’s labours of love, unpaid and outside the capitalist system, can be categorized as sloth at all.

“Colonialism, Race, “the Indolent Native”, and You”

Overview: Why did European colonizers / settlers in the Canadian context, mobilize representations of Indigenous people as “indolent”: slothful, lazy, non-industrious, and stuck in a pre-modern time? What do these “race logics” reveal about settlers and how colonial power operates? How are these race logics connected not only to the past violence of land-theft and Indian residential schools, but to contemporary settler violence against Indigenous women, children, men, and Nations? This lecture draws upon critical race, critical Indigenous, settler colonial, and feminist anti-racism studies to explore these questions and their significance for social justice and change today.

“Obesity: Movement as the heart of the issue?”

Overview: Sloth has many negative connotations including its association with obesity. The World Health Organization has declared obesity a disease, and children are the group most implicated in the “war on obesity” due to the anticipated burden they will place on our health care system. As a result, schools, and physical education in particular, are seen as appropriate avenues of intervention. BUT, there is much less consensus on the science of obesity than one might expect; Obesity is actually protective in some invasive medical procedures, and there is the growing recognition of the possibility of being fat, heathy, and active. Further, it is possible that current physical education practices continue to marginalize bigger students already stigmatized by other segments of society (for example, BMI, standardized performance tests, etc). We often treat bigger bodies as problematic subjects in need of being fixed through fitness regiments. In short, these practices do not help people lead healthier lives, and we need to look for ways to make being fat a survivable experience in physical education, as well as explore ways in which bigger bodies can positively re-imagine themselves doing physical activity.

Overview: Over half a century ago American social psychologist Stanley Milgram (1963) undertook his (in)famous Obedience to Authority experiments. The most well-known variation demonstrated that 65 percent of ordinary people would, albeit hesitantly, follow an experimenter’s instructions to inflict seemingly intense electrical shocks on an innocent, even likeable, person. This lecture will present Milgram’s results along with a theoretical overview of some of the more powerful psychological, social psychological and sociological forces behind them. This presentation will show that many of these forces can be traced back to the sloth that, to varying degrees, can be found in all of us.