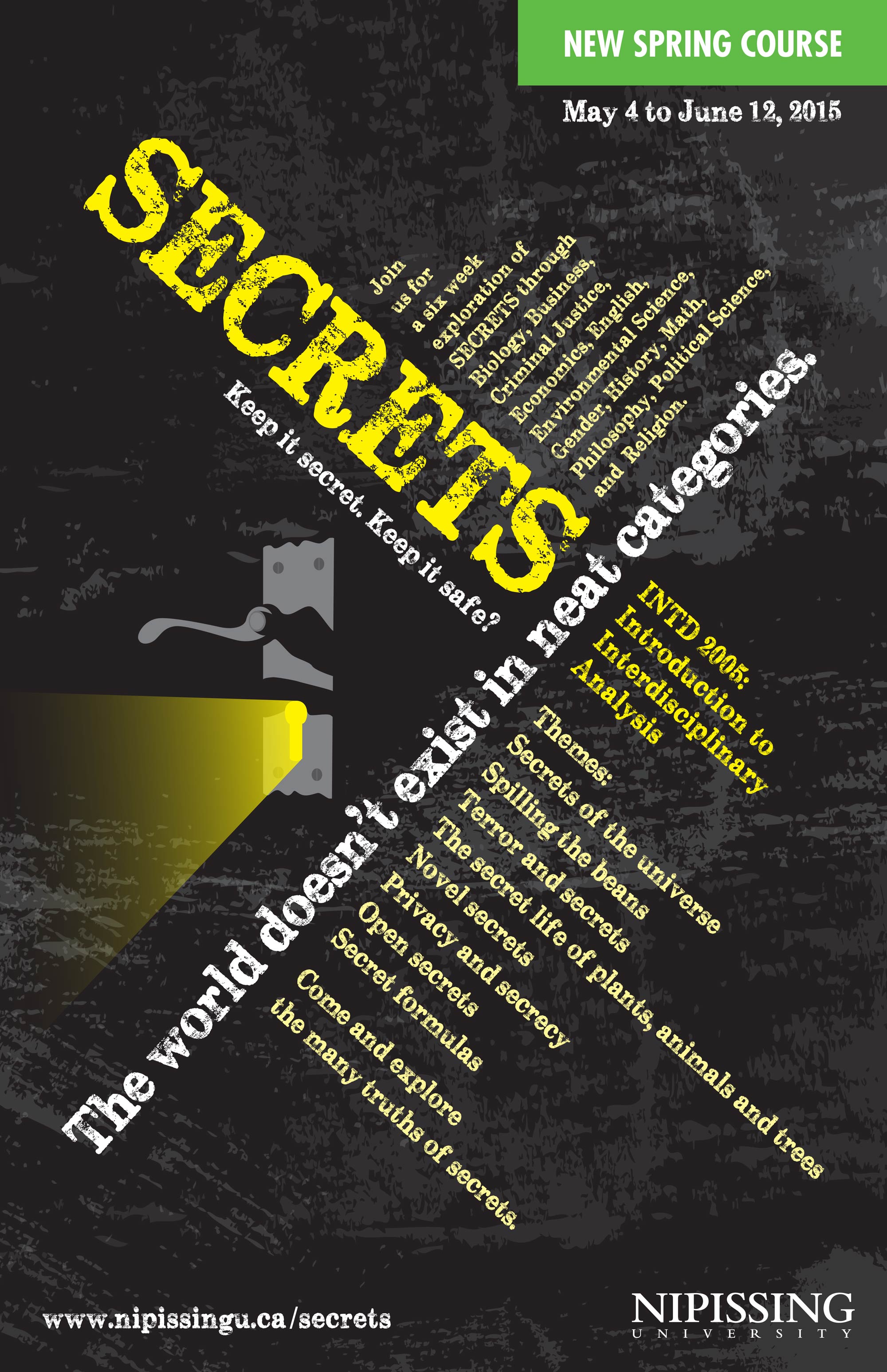 SECRETS was our 3rd offering of the interdisciplinary concept course in the condensed format in the spring term and we quickly ventured into tricky terrain around secrecy. How do we make sense of the deep experience of pleasure that so often accompanies both the keeping as well as the revealing of secrets? While the connection between shame and secrecy is well trodden turf, less so are its pleasures. And, as it turned out in the journey from Gender Equality and Social Justice, through Biology to Political Science, deception it seems is the stuff of life, fundamental to the reproduction of so many species whose seductive performances often belie hidden agendas; fundamental too to the reproduction of the polis. Secrets are, at base, always about power and knowledge. Someone knows something important and someone else doesn’t…but they just might find out. Where better than the heartland of knowledge production, the university, to reflect on the many ways in which the very disciplines whose job it so often is to reveal secrets—the secret language of trees, the secrets of the universe—often find themselves producing secrets of their own.

“The Open Secret of the Closet: American Idol, paratexts and Adam Lambert”

The closet is a popular metaphor that suggests an individual is keeping a secret. Typically, that “secret” is the belief that the person is not heterosexual. In this class we explore what it means to assume that virtually everyone is heterosexual until they declare otherwise. What does it mean to expect non-straight people to “come out” to friends, family, coworkers, strangers and the general public? Is every new situation a new closet? Drawing on the work of Draper (2012), we explore these questions through an examination of media texts written about American Idol contestant Adam Lambert before and after he publicly identified as gay. We discuss how Lambert was represented as “queerly ambiguous” on American Idol and in personal interviews, while paratexts—such as magazines and newspapers—asserted rhetorically that Lambert was “obviously” gay and closeted. Through this example we critically examine the open secret of the closet, as well as the cultural emphasis placed on being securely straight or openly gay.

“You Could Never Tell: Secrets Kept in Canadian Fiction”

Overview: How does literary fiction engage us emotionally and intellectually by withholding and revealing secrets? Many of us are familiar with detective fiction in which carefully placed clues and red herrings engage the reader in solving the mystery, but might not all literature be a form of detective fiction, and the reading process itself a way to satisfy our desire to unlock secrets and discover what other readers (less clever than us) may be missing? In this lecture we will examine two short stories by major Canadian writers Margaret Atwood and Sinclair Ross, for whom Canadian geography becomes a map of secrets, complicated by unreliable narrators, psychological trauma, and secretiveness as survival strategy.

“Sex and Murder: carnivorous plants and sexual deception in the animal kingdom”

Carnivorous Plants:  From a human perspective, plants appear to be inanimate and therefore unlikely to have many direct – or even interesting – interactions with animals.  But some plants keep a very dark secret: in order to survive, they must kill and devour animal prey.  What types of plants commit these insidious acts of carnivorous behaviour?  How do they deceive their prey?  This lecture will examine the secrets of plants that kill.  We will decipher some of their means of deception, and consider how some of their methods can actually benefit humanity.

“The Secret Language of Trees”

Overview: The information contained in the annual growth rings of wood produced by many tree species provides a record of past environmental conditions, which in some cases can stretch back as far as 4,500 years in a single individual tree. Dendrochronologists have developed quantitative tools that can read the information contained in these rings in a manner similar to reading a retail bar code, and interpretation of the patterns in these rings can yield insights into the past that cannot be drawn from other sources. Wood is a ubiquitous material, present across the globe in natural environments and in human cultural artifacts. This lecture will explore the secrets revealed about environment and society through breaking the tree-ring code.

“Secrets of the Universe: and how it conspires to keep”

Overview:  When it comes to unlocking the mysteries of the Universe, humankind has made tremendous progress despite our being confined here on a mere “speck of dust” in the almost incomprehensible vastness of space. Through intellect and ingenuity, we have gained remarkable understanding and consensus on how and when the Universe began and how it continues to evolve. Still, many deep and fundamental secrets remain, and the underlying structure of space, time and matter within the Universe itself make some of these secrets at worst unknowable, and at best extremely difficult to reveal. In this presentation, after summarizing what we think we know so far and how we know it, we will identify and consider some of the most tantalizing of these secrets, including: the “hidden singularities” inside black holes; the huge matter/antimatter imbalance (or why we’re here at all); the existence of, and desperate search for, “dark matter”; and the even more baffling question of “dark energy”. Indeed, the last twenty-five years of science may have brought us further than ever from achieving Stephen Hawking’s quest for a “theory of everything”. Though the talk will draw upon deep theoretical results from classical physics, general relativity, cosmology, quantum mechanics and particle physics, these discussions will remain “general-audience-friendly”.

“The Secret Economy: Building and Maintaining Your Black Market Empire”

Overview: The black market, also known as System D, the underground, the shadow economy, or the parallel economy, encompasses all income generating activities that take place outside of formal markets or are unreported or not recorded. These activities may be legal or illicit. In the wake of the 2008-2009 financial crisis and the Great Recession, the black market economy continues to be the fastest growing economy in the world. Who are the people involved in the black market, why are they attracted to the black market, and is the black market unambiguously negative to our economic and social well-being?

Overview: What are brands and why are they important to businesses and consumers?  How is the topic of secrets related to the notion of brand image?  In this session, we will examine important models of brand image, how secrets can be used to build a brand and explore the impact of negatively perceived secrets which are true and those that are false.  Extensive examples will be given to illustrate these relationships.  Key concepts that we will explore include: brand image; brand authenticity; consumer attitudes; and brand trust.

“Secrets, Lies and Whistleblowing: The Ethics of Keeping and Disclosing Secrets”

Overview: In this lecture/discussion, we will take a philosophical approach to the ethics of secret-keeping and to the associated ideal of transparency.  We will consider these both at the level of personal relationships and at the level of national and global politics, although our focus will be on the later.  Questions to consider include: Is a transparent social/political world an ideal one?  Is the leaking of government secrets — “whistleblowing” — a form of civil disobedience?  Is it justifiable, and under what conditions?

Overview:  One thing we’ve come to discover about torture over the past few years is that it is not very successful at convincing terrorists to confess their secrets.  Despite countless fictional presentations, no ticking time bombs, terrorist networks, or rogue nuclear weapons have been uncovered through the use of torture.  Yet torture remains an important tool against terrorism, at least in our social imagination.  What secrets are truly confessed through the use of torture, and what secrets are we keeping from ourselves that explain its use?

“Me first: The politics of pre-emptively disclosing secrets”

Overview: Why do people in the public eye tend to disclose secrets pre-emptively?  Why does “the public” care about the “private lives” of politicians (and attendant institutions)?   In this lecture and discussion we will reflect on how official politics has come to be played out in, by and through media.  Drawing on cultural, social and political theory to make sense of contemporary case studies, we will consider how “full disclosure” might undermine the very democratic institutions that it is meant to shore up.  If self-governance is desirable, then do we need a new image of/for politics?  Key concepts that we will explore include: media politics, communication networks, scandal, the personalization of politics, pre-emption, and the crisis of democracy.

“Secrets: Conversations with Interrogators and Insurgents”

Overview: In September 2000, Israeli politician (and later Prime Minister) Ariel Sharon visited the Temple Mount in Jerusalem.  Seen by many Palestinians as confrontational and aggressive, the visit prompted protests and responses that quickly descended into cycles of violence and re-violence.  Before the Al-Aqsa Intifada (Second Intifada) ended in early 2005 approximately 3,000 Palestinians and 1,000 Israelis had been killed.

One of the key features of the Al-Aqsa Intifada was the use by Palestinian insurgents of suicide bombers.  To counter this tactic, the Israeli government and security apparatus relied heavily on the shadowy spy agency Shin Bet to gather and exploit Intelligence.  In essence, this secretive organization was charged with uncovering secrets.

Our discussion considers the realities of the Al-Aqsa Intifada ‘on the ground’ with an emphasis on the secret war between Shin Bet interrogators and Hamas and Islamic Jihad (PIJ) insurgents.  Who were the primary actors? What were their tactics and strategies? Why? What were the outcomes?

In 2012, Dr. Stephen Connor interviewed members of both the Israeli security forces (including Shin Bet) and Palestinian insurgents (Fatah, Hamas, PIJ).  By listening to the voices of these interrogators and insurgents, our discussion will consider the nature, motivations, practices and legacies of the violence that sits at the intersection of occupation, state security and secrets.