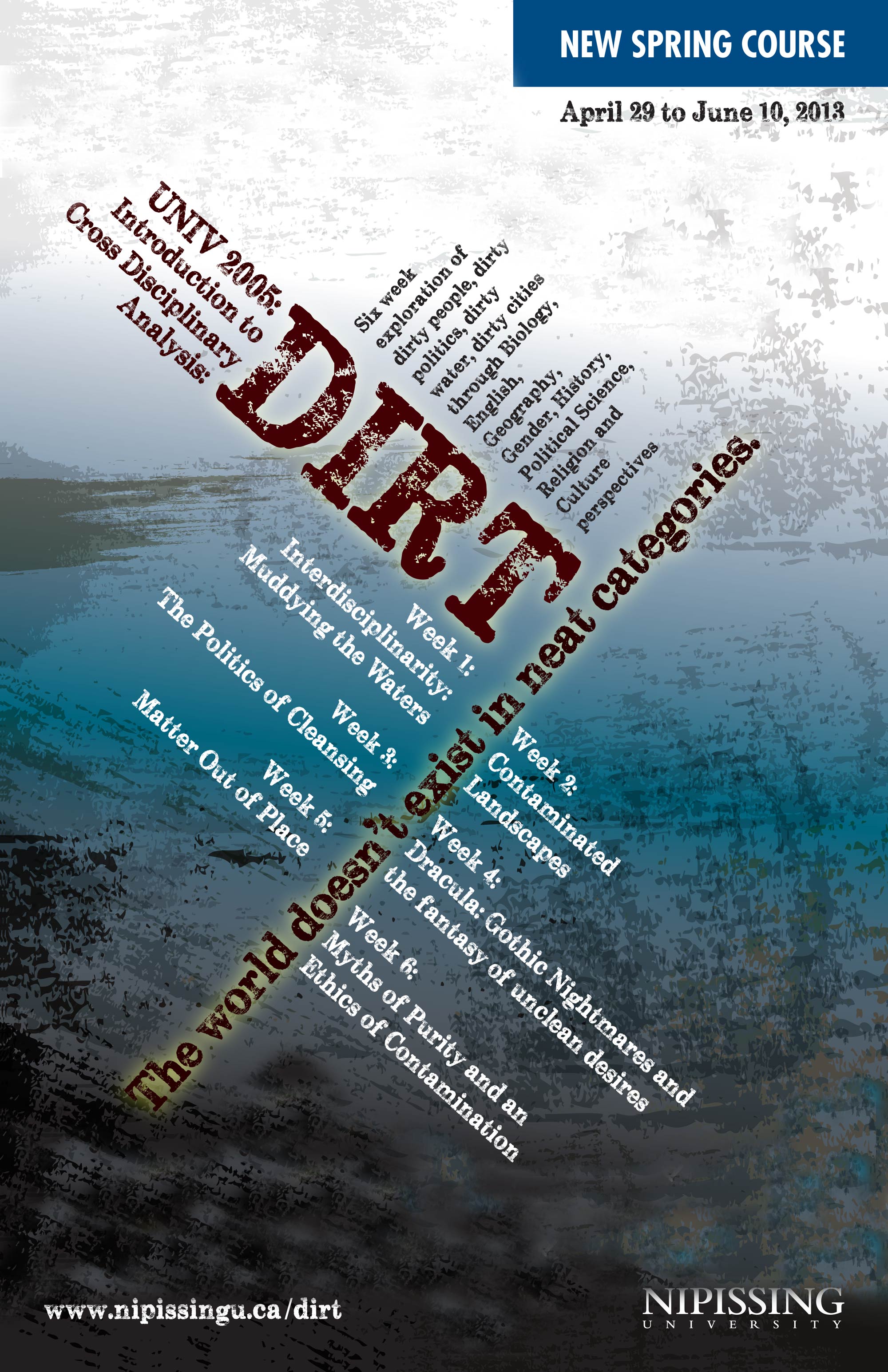 DIRT was our first interdisciplinary concept course and one of the things we discovered was that it is really only after the fact that we can say what the course was about. In retrospect, DIRT was an exploration of taxonomy, a journey into thinking about the way we organize the world in supposedly neat and bounded categories, and the values we attach to those boundaries. Along with so much more, we learned that a biologist would never refer to soil as dirt, that many religions divide the world into the “clean” and the “unclean,” and that ancient Roman political solidarity was actually enhanced by large scale communal bathrooms!

DIRT allowed us to explore the material conditions shaping the interpretation and understanding of a range of epistemologies from the science of Aristotle to the literary insights of Bram Stoker and always in the background was a consideration of the way the university itself organizes and produces knowing, disciplined subjects.

Overview: We will look at the landscape of human interaction with dirt. Using John Snow’s ‘Cholera Map’ of 1850s London, we will explore how this revolutionized our understanding of disease and health geography.

Overview: In this lecture we will explore the history of natural resource development on the land surrounding the city of Sudbury, Ontario and the impacts industrial activities had           on terrestrial ecosystems. We will specifically examine the key role that modification of soils played in both the degradation of the original pine-dominated forest ecosystem, and in the successful restoration of the area to a state that supports a healthy ecosystem providing social, cultural and economic benefits to the people of Sudbury. Central to the discussion will be the critical importance of soil as a medium that drives ecological change.

Overview: The idea of a wild, clean, and untouched wilderness has been central to artistic representations of Canada since the nineteenth century. However, the increasing role of oil extraction in the Canadian economy is changing the cultural, political, and geographical landscapes of the nation. In this class, we will use photographer Edward Burtynsky’s images of the Alberta Tar Sands to examine the politics of art and “dirty” landscapes in twenty-first-century Canada.

Overview: Two histories of shit can be drawn out of ancient Rome.  One is neat, following pipes from latrines through a sewage system whose innovations continue to be improved upon in cities across the world.  Such progress can also be seen in the shift from animals and their waste flowing through city streets, to their sanitary slaughter in abattoirs on the outskirts of town.  The other history is dirty, with shit being flung through the air with little regard for where it might land, whether in the early streets of Rome, contemporary slums, or dog parks.  Despite penalties, plastic bags, and other attempts to contain shit bombs, they continue to fly. This session highlights the reclamation of dirty practices (e.g. diaper-free babies in “elimination communication” with their parents), with special attention to what is washed away in the reclamation process (e.g. dogs’ role in the household, to eat babies’ shit, among other waste).  It raises questions about the politics of sanitizing our dirty histories.

Overview:  This session forces us to imagine the unimaginable: the absolute destruction of human beings.  We begin with an examination of the crime of genocide as it was defined by the United Nations in 1948. The definition is used as a demarcation point to further examine the question “what is genocide and ethnic cleansing, how and why does it occur.” The objective of this session is to offer students a critical understanding of the paths to modern genocide.

Overview: Like all gothic novels, Dracula gives expression to cultural fears and (sub)cultural desires.  We consider the novel first as a nightmare of social and bodily contamination, both in its original late Victorian context and in its cinematic afterlife.  We then reconsider Dracula as, not so much a nightmare, but a fantasy of various “unclean” desires.

Overview: If dirt, following Mary Douglas, is best understood as ‘matter out of place,’ then concepts of purity, pollution, and corruption can only be understood against a  backdrop of social categories that order the world.  Experiences of revulsion and repugnance at the impure, the corrupt, the abominable, or the monstrous point to a background order that is not always articulated.  We will study examples of contemporary moral and political discourse that can be usefully examined in light of  Douglas’ understanding of dirt.

Overview: In this lecture we will use the classic text  “Purity and Danger: An Analysis of Pollution and Taboo” as a jumping off point for talking about the religious dimensions of dirt. Purity is a central metaphor in many of the world’s religions and we will examine some of the ways in which this has structured social relationship and shaped attitudes      towards what is deemed “unclean.”

Overview: In this lecture we will apply a gender analysis to recently published research that analyzes and seeks to expose some of the complexities of human sexuality and desire. What should we make of the findings of Ogas and Gaddam, authors of A Billion Wicked Thoughts, who instead of asking people what they think about sex—an approach to sex research long known known to be wildly unreliable—instead went after internet big data, tracking the internet searches of over 100 million users. Just imagine what they found! In this class we will be considering the ways in which sex so often gets socially constructed as ‘dirty’ and how new technologies are revealing just how many of us are pretty into this kind of dirt!